Marriage means a new start. A new life, a new family, new commitments and a new best friend the engagement ring! The engagement ring to date has made great trip and is far from simple iron ring used by the Romans in the 4th century. An engagement ring usually brings to mind the image of a ring with a stone in the centre, usually a diamond. Diamonds are thought to have magical powers and strengthen the love, purity and loyalty. 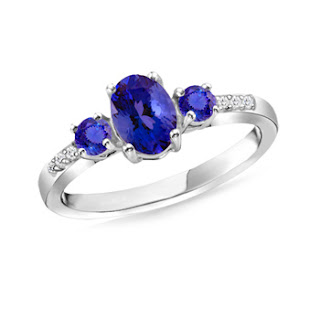 Let's take a look at the history of the engagement ring. Since ancient times people use symbols to identify an event. Thus the institution of marriage does not fail to set and its own symbols. The ring symbolizes the union of two people. The circle is the symbol of eternity, the "whole" visual, the eternal love and devotion, the very life that begins and ends. The perfect circle joins just two identical halves perfectly tracks ...

The first record of the history of the ring of marriage begins in ancient Egypt in the 17th century BC The Sun and Moon were the most important deities in Ancient Egypt (and oldest throughout Mesopotamia) and why they were honoured with a ring. The link between these two beacons and the eternal nature depicted as circle, while the gap in the centre symbolized the entrance gate to the unknown. Indeed, the ring, the ancient Egyptians associated with the house and hearth. Wedding rings are recorded in ancient Egyptian papyrus was first time that the ring of honeymoon. The ancient Egyptians wore the ring on the third finger of her left hand because it believed that the vein that runs through this finger leads straight to the heart (vena amoris). The conception of the ancient Egyptians for the ring transplanted to Greece and the soldiers of Alexander the Great. This preferred finger and future peoples since. In America, indeed, still wearing his wedding ring in his left hand, continuing the Egyptian tradition. In Europe, however, in most countries, the wedding rings worn on the right hand now. In Greece, won the engaged wearing his wedding ring on the fourth finger of the left hand and just get married to move in the right hand.

The first rings / wedding rings were made of perishable materials (ivory, skin, bones, etc.) that destroyed easily and relatively quickly. Therefore, in Rome, when adopted this custom, began to use iron. They believed that the eternal symbol of union of two souls should also be durable. Then start using silver, copper and brass. Eventually, the metal was won gold, especially after the second century AD as a way to show people their wealth through their husbands. Moreover, the initial use of the ring was commercial, the exchanged as a seal a trade agreement.

In ancient times, the ring also meant a binding agreement between the spouses. The husband was now the owner of the woman and had the right to use as desired. Another fact was that the woman had the ring in his hand protected by would-be suitors. Over the years, the custom of wedding ring became stronger and began to display various intricate patterns on the rings. Then added semiprecious stones that had put the symbolism and significance. The heart symbolizes the red ruby, sky blue sapphire and diamond hardness of the indestructible bond of marriage.

Pope Nicholas, in 860 AD, made mandatory the ring for the celebration of the sacrament of marriage, which necessarily had to be golden. Gold showed that he who marries honours its decision paying a high price. It showed also that in such a significant act like marriage could not be used metal of lesser value and flash. The implementation of the wedding ring on the finger and she played her role. If it was loose mean lack of interest and impending separation while they were firm would lead the couple to suffocation and difficult marriage.

A distinction should be made and clarified is between the engagement ring and wedding ring wedding. The engagement ring was "invented" in 1215, when Pope Innocent III declared that it must be an interval between the betrothal and marriage. The marriage proposal and engagement accompanied by the now classic ring that indicates the promise of marriage followed. It also broadened the options for the metal includes silver and iron. A new kind of engagement ring came to the fore during the Elizabethan period. It was a set of three interlocking rings to be worn by the groom, the bride and a witness to the wedding day. Gradually the metal rings began to adorn themselves with precious stones, but diamonds are very rare and used exclusively by aristocrats and kings. The "institution" of the ring (the great "stone" that adorns the ring) in the engagement, the Archduke Maximilian started by the Habsburgs. In 1477 offered his beloved a diamond ring, the first in recorded history, as a seal of their engagement. Since then, the customary engagement (or wedding proposal) be accompanied by purchasing a ring. A classic ring is a ring with three rings of braided together. This ring appeared in the 15th century. One link in the ring was plain metal while the other two were carved and embellished with stones. On the day of betrothal, took a pair of a ring with stones and a witness to the plain ring. On the day of marriage unites the three rings together again and gave the bride.

The Christian ceremony, wedding rings are worn initially engagement present priest to declare the promise that they will result in "communion of marriage." The marriage union is the wedding ceremony where the ritual involves the exchange of rings that have been blessed by the priest on the gospel, being crowned with wreaths and shared Eucharist. Also, hands joined intending thus declaring the union of soul and body into one.

In the 18th century, diamonds were discovered in Brazil and became widely used by the rich. In the late 19th century found abundant diamonds in Africa and since then things have changed permanently. The Marilyn Monroe immortalized the diamond ring with the song «Diamonds are a girl's best friend» and DeBeers with the motto «A diamond is forever» ensuring that when an engagement ring is the best choice is a diamond!

Today, engagement rings do not conform to the standards of the past. The choices are immense and personal style is the key criterion for choosing the right engagement ring.